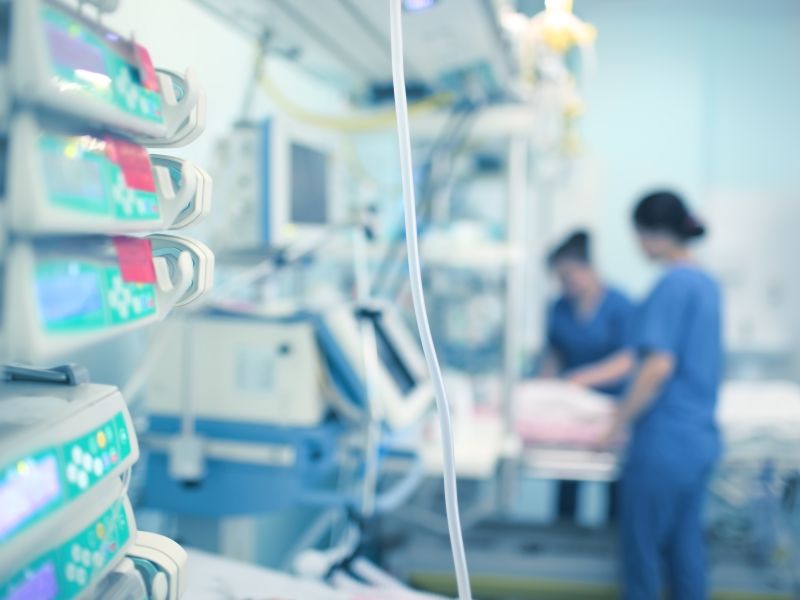 More than 41,000 COVID-19 patients are hospitalized across the country, a 40 percent rise in the past month, The New York Times reported.

But in sharp contrast to the early days of the pandemic, more of these patients are being cared for in sparsely populated parts of the country, where the medical infrastructure isn't as strong as it is in metropolitan areas, the Times reported.

In Utah last week, hospital administrators warned Gov. Gary Herbert that they would soon have to ration access to intensive care units, and requested state approval for criteria to decide which patients should get priority, The Salt Lake Tribune reported.

"We told him, 'It looks like we're going to have to request those be activated if this trend continues,' and we see no reason why it won't," Greg Bell, president of the Utah Hospital Association, told the Tribune, the Times reported.

In Kansas City, medical centers turned away ambulances this month because they had no room for more patients. In Idaho, a hospital that was 99 percent full has warned it might have to send coronavirus patients to hospitals as far away as Seattle and Portland, Ore., the Times reported.

Hospitals in hard-hit parts of the country are resorting to a tactic commonly used during the pandemic as it depletes medical resources: limiting other medical services, the newspaper said.

In Tennessee, the Maury Regional Medical Center on Saturday suspended all elective procedures requiring an overnight stay to make room for COVID-19 patients. In Texas, Gov. Greg Abbott has asked the federal government to authorize the use of a military hospital at Fort Bliss, outside El Paso, to treat civilian non-coronavirus patients, the Times reported. In places like Milwaukee and Salt Lake City, field hospitals are already being opened.

Things will likely get worse: The latest surge of coronavirus infections has brought the seven-day average of new daily cases to heights not seen since the pandemic began, CNN reported.

The seven-day average of new cases hit 68,767 on Sunday, topping the previous peak of 67,293 reported on July 22. Friday and Saturday were record-breaking days, with more than 83,000 new cases added each day, CNN reported.

Last week, the antiviral drug remdesivir got full approval from the U.S. Food and Drug Administration. The approval comes after the agency granted it emergency use authorization last spring. It is given intravenously to hospitalized patients.

California-based Gilead Sciences Inc. is selling the drug under the brand name Veklury. It cut the time to recovery from COVID-19 by five days -- from 15 days to 10, on average -- in a large study led by the U.S. National Institutes of Health, the FDA announced in a statement.

"Today's approval is supported by data from multiple clinical trials that the agency has rigorously assessed and represents an important scientific milestone in the COVID-19 pandemic," FDA commissioner Dr. Stephen Hahn said in an agency news release.

Veklury is approved for people aged 12 and older who weigh at least 88 pounds and are hospitalized for a COVID-19 infection. For patients younger than 12, the FDA will still allow the drug's use in certain cases under its previous emergency authorization.

The drug works by blocking the ability of the virus to replicate itself. Kidney and liver function tests are required before giving patients remdesivir, and the label warns against using it with the malaria drug hydroxychloroquine, because that can curb its effectiveness, the Associated Press reported.

"We now have enough knowledge and a growing set of tools to help fight COVID-19," Gilead's chief medical officer, Dr. Merdad Parsey, said in a statement.

Remdesivir is either approved or has temporary authorization in about 50 countries, Parsey noted.

Its price has been controversial, costing between $2,000 and $3,000 for one course of treatment, given that no studies have yet found that it improves survival, according to the AP. Last week, a large study led by the World Health Organization found the drug did not help hospitalized COVID-19 patients, but that study did not include a placebo group and was less rigorous than previous ones that found a benefit, the AP reported.

COVID-19 continues to spread around the globe

By Monday, the U.S. coronavirus case count passed 8.7 million while the death toll passed 225,000, according to a Times tally.

Curbing the spread of the coronavirus in the rest of the world remains challenging.

Several European countries are experiencing case surges as they struggle with another wave of coronavirus infections and hospital beds begin to fill up, the Washington Post reported.

In England, Prime Minister Boris Johnson has instituted a three-tier lockdown in a bid to slow a startling spike in coronavirus cases across the country. In recent weeks, new coronavirus cases have quadrupled and there are now more COVID-19 patients hospitalized than before the government imposed a lockdown back in March, the Post reported.

Addressing the nation recently, Johnson warned Britons that the country's rise in cases was "flashing … like dashboard warnings in a passenger jet."

Things are no better in India, where the coronavirus case count has passed 7.9 million, a Johns Hopkins tally showed.

More than 119,000 coronavirus patients have died in India, according to the Hopkins tally, but when measured as a proportion of the population, the country has had far fewer deaths than many others. Doctors say this reflects India's younger and leaner population.

Meanwhile, Brazil passed 5.3 million cases and had over 157,000 deaths as of Monday, the Hopkins tally showed.

Cases are also spiking in Russia: The country's coronavirus case count has passed 1.5 million. As of Monday, the reported death toll in Russia was over 26,000, the Hopkins tally showed.

Worldwide, the number of reported infections passed 43.1 million on Monday, with over 1.1 million deaths, according to the Hopkins tally.

The U.S. Centers for Disease Control and Prevention has more on the new coronavirus.