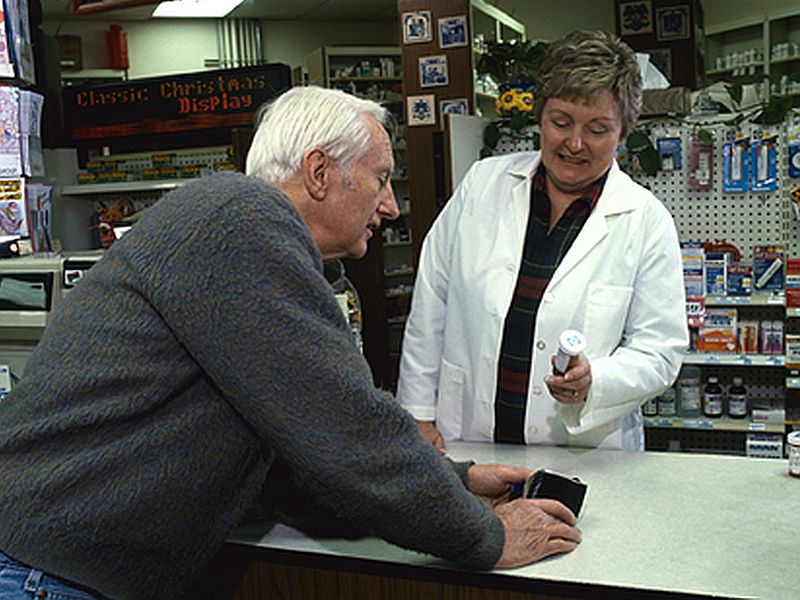 FRIDAY, April 19, 2019 -- When a neighborhood pharmacy shuts down, it could have dire repercussions for heart patients living nearby, new research suggests.

That's because such closures could mean patients skip or stop taking the prescriptions they need to stay healthy and safe, according to a team from the University of Illinois at Chicago.

A heart specialist who wasn't involved in the new study said many patients fail to adhere to the prescriptions they've been given.

"We try our best to educate and consolidate medications as much as possible, but in the end it is up to the patient to obtain and take the medications," said Dr. Satjit Bhusri, a cardiologist at Lenox Hill Hospital in New York City.

For example, "simply missing one dose of heart failure medication or blood thinner medication for an arrhythmia can lead to deadly consequences," Bhusri said. In fact, he said, prescription non-adherence "is the leading cause of re-admission to the hospital for heart patients."

So what role does the convenience of a local pharmacy play in all this?

To find out, Qato's team analyzed data from more than 3 million U.S. adults, aged 50 and older, who filled at least one prescription for cholesterol-lowering statin drugs at a retail pharmacy between 2011 and 2016.

The investigators compared prescription adherence for about 93,000 people who had filled a prescription at a pharmacy that later closed, against that of people whose pharmacy remained open.

Nearly 24% of patients whose pharmacies closed failed to refill their statin prescription during 12 months of follow-up, compared with nearly 13% of those whose pharmacies remained open, the findings showed.

There were significant declines even among patients who had filled all prescriptions for their statins ("fully adherent") in the year before their pharmacy closed. Among patients who were fully adherent, 15% of those whose pharmacies closed stopped taking their statins, compared with 3.5% of those whose pharmacies did not close.

Patients most likely to stop use of their heart medications after their pharmacy closed included those who used independent pharmacies; those who filled all their prescriptions at a single store; and those who lived in neighborhoods with fewer pharmacies, the study found.

The risk was lowest among patients who regularly used multiple retail stores.

This finding is important because retail pharmacies, particularly chains, often promote loyalty programs that encourage patients to fill all their prescriptions at one of their stores, Qato said.

But another cardiologist said "mom and pop" independent pharmacies have their advantages, too.

"I find independent pharmacies to be most helpful," said Dr. Guy Mintz, who directs cardiovascular health at the Sandra Atlas Bass Heart Hospital in Manhasset, N.Y.

"Independent pharmacies are service-oriented and know their customers," he said, and they "go out of their way to help patients; an example would be going online and getting patients coupons for medications."

And Mintz believes that pharmacy closures are not the real problem.

"Instead of blaming pharmacy closures, the study authors fail to put blame where it belongs, which is on the patient and the physician," Mintz said.

"Physicians need to spend more time educating patients thoroughly," he suggested. "If the patients understood their cardiovascular risk and the role of these medications in preventing a heart attack, stroke or death, not only would they take their medications, they would find a new pharmacy to get their prescriptions immediately."

The American Heart Association has more on heart medications.